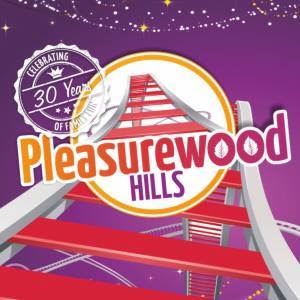 Pleasurewood Hills is a theme park situated just off the A12 in Suffolk. It's just a quick 10 minute drive from ours and in the past we have even invested in season passes.

The park is open from 10am -5/6pm daily throughout the summer season and weekends before and after this. Tickets can be purchased at a slight discount online but the gate prices are £18-21 with discounted rates for concessions. Children under 1m enter for free. For full details please click on the link.

We had arranged to meet friends here for the August Bank Holiday, they had packed up a picnic for us all to enjoy and we met outside the main entrance at 10am.
When we arrived we saw that the car park was already busy. They had car park attendants directing visitors, although one of them wasn't paying much attention and there was some confusion for drivers which another member of staff then had to rectify.
There is ample free parking for visitors.
The car park, like at many theme parks is on grass so can be a bit bumpy or sludgy after wet weather so drive with caution when necessary.

The queues seemed fairly busy but as we approached the gates were opened and many visitors had already purchased their tickets and entered the park so we were able to walk straight up to the admission booth.
Displayed on the admission booths is notification of ride closures for the day. We were very disappointed to see three rides closed on the day of our visit, all were major attractions! The Rattlesnake we had already heard was closed and this is a long-term closure. Also the big attraction Wipeout was closed as was Marble Madness. Very disappointing. Full ticket prices still apply regardless of ride closures.
You do, of course have the chance to change your mind before you pay, to turn back but when you've made plans and the chidlren and their friends are excited then really that wasn't an option.

Once we had paid and were given our wristbands we made our way through. As you enter there is a large shingled area with an old-fashioned van in the centre. Standing at the van to greet visitors and for photos, stood Woody Bear. Woody is the long-time mascot of Pleasurewood Hills. He once was a tubby Bear dressed in USA themed clothing, but over the years he has had some style changes, changing his costume a few years back to a more "French sailor" striped top before changing back to the well remembered stars and stripes again in recent years, he has even lost a few pounds recently, now sporting a more slim line look. Personally I prefer the tubby bear from my childhood.

Over to the left there is a large notice board detailing show times, we always take a photo of this so we never miss the shows we want to see! There are three shows at Pleasurewood this year; the sealion show, the parrot show and the high dive show.

We started our visit by going over to Enigma, classed as a thrill ride on the map, this roller coaster is fun for all the family (minimum height 1,25m unaccompanied, 1m accompanied.)
This was Emily's first time, she has grown a lot braver since our trip to Florida this summer! 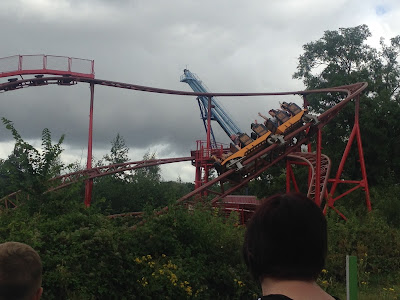 Enigma proved a big hit with all the kids!

From here we headed over to Jolly Roger (minimum height 1.4m) This is a high Sky Drop, unfortunately, Mollie wasn't quite tall enough to ride, much to her disappointment. But Chris and our friend plus their daughter rode and enjoyed it.

Then it was time for the Pirate Ship, all the children wanted to ride this, again a first time for Emily, but as we approached the attendant was closing the ride. So another big ride closed!

So we went over to the Wave Swinger, this is new for this year, however, the park has had a similar ride for several years so didn't really feel as if they had added anything. The minimum height to ride this is 1.25m on a single seat or 1m on a double seat. All the girls rode this and loved it! 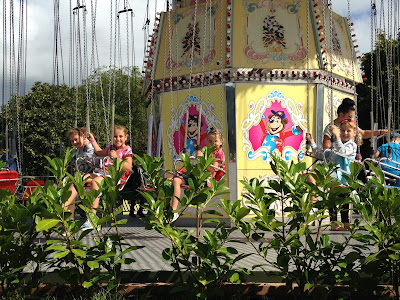 After this we all headed on to the Hyper Drive, this is classed as a thrill ride on the website but I think it should be under family ride to be honest. A fun bumper car ride. Minimum height of 1.2m accompanied and 1.4m unaccompanied.
This again is new this year but the park also has another ride the same (albeit older) over the other end of the park. 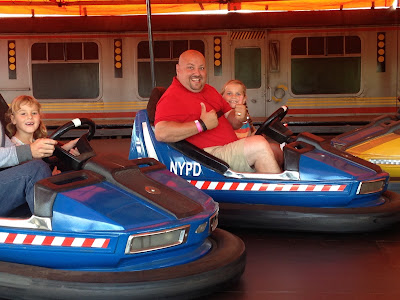 From here the children stopped off in the candy shop along "Main Street" for a treat and the lady serving was lovely. Then on to the carousel whilst the two dad's went on the Go Karts (minimum height 1.4m in a single seater, 1.6m in a double seater with passenger recommended minimum of 1m.) There is usually an additional charge for this but on this occassion it was free.

Then it was picnic time. Pleasurewood Hills does have food outlets but we never find the food that tempting and the park welcomes you to bring your own. There are several picnic areas around the park and we found a bench near to the miniature railway.

After this we headed down to the other end to do the Fireball, another thrill ride with a minimum height of 1.4m.
This spins you rapidly whilst also swinging you out to the sides (think the swing motion of a pirate ship.)
Mollie was quite relieved she wasn't tall enough for this when she saw it in action!

All the girls were tall enough to ride without an adult, this was their first time so they had strict instructions to sit nicely and be sensible!
Quite nerve-wracking for a parent to take the plunge and allow your children to take this step.
As we then waited for our seat to come round the attendee called two visitors over from the "Fast Pass" entrance (I hadn't heard of the park having Fast passes before and after looking at the website it appears they are a facility for disabled access, however I am not 100% sure on this.)
Now I fully appreciate that these visitors may not be able to queue for long but I was worried about being separated from the children. I asked the attendant whether we could ride behind the girls but he simply shrugged and loaded the Fast Pass visitors on the next seat. I do feel that families/groups should be sent together so perhaps next time Pleasurewood Hills could either send the Fast Pass guests on before the children (they were already standing there) or let the parents ride after their children. This just needs some common sense really.

Fortunately the girls were very sensible and waited at the other end for us to join them.
Here the girls went on to the Kite Flyer, minimum height of 1.05m. On this ride you lay down and the ride spins round and pivots.

Then we wandered over to the play area, it has a large multilane slide, this could do with a bit of a clean up to be honest. There is also a climbing and swing set. Until fairly recently there was another one but this had been removed.

It was then time for the Sealion show, this is always a highlight of out visit and as always it was great. The sealion trainer was really good and the animals looked like they were having fun. They also had a seal this time who we haven't seen before, I'm guessing she's a new addition. 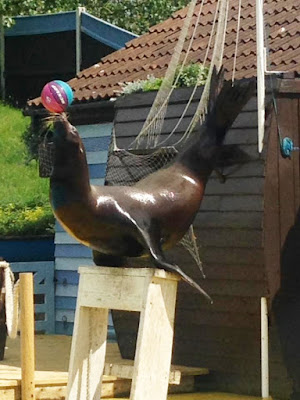 After this we found out that the Pirate Ship had reopened so we headed over to it, all the girls went on this ride and thoroughly enjoyed it. (minimum height 1.3m unaccompanied, 1m accompanied.)
We then stopped off for ice creams, there is a little hut just round the corner from the Pirate Ship that sells whippy ice cream or there is the Tea Rooms near the Carousel which sells ice lollies and Carte Dor. 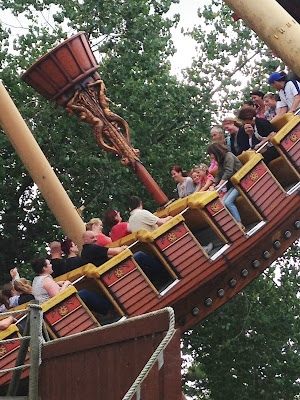 At 5.05pm we headed to Timber Falls, again listed as a Thrill ride, I'd say more a family ride. (minimum height 1.25m unaccompanied or 1m accompanied.)
Sadly they had closed the queuing area for this ride as apparently it was too long. It was very disappointing to see the boats going round with just 2-3 people on board. We even saw a couple of boats with single riders! If they had filled the boats then more of the paying customers would have had a chance to ride! The line closure caused quite an uproar but they didn't budge, nor did they make sure the boats were full on each turn.
Such a shame.

To end the day the girls had another go on the Wave Swinger. The attendant on this ride was really great with the kids and those waiting to ride.

Then it was time to head home.
As a family and being there with good friends we had a fun day, great company and some fun rides. The day did have a dampener due to the ride closures and the other couple of issues but we did our best to enjoy what we could and make the most of it.

It was disappointing to have paid £74 for a family of four to then have not been able to do some of the parks biggest attractions.

As we left there was quite a queue in the Information and Reception building, I can only presume there were other disgruntled visitors perhaps...