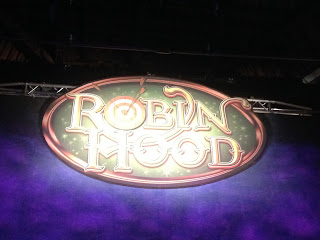 We have a family tradition of going to the panto on Christmas Eve, for the past four years we have gone to St Georges Theatre, Great Yarmouth.

St Georges Theatre, located in Kings Street, was built in the 1700's and is a Grade 1 listed building. It had extensive restoration from 2006-09 and reopened under the St Georges Theatre Trust and it has grown rapidly in popularity.

St Georges Bar, cafe and Plaza offers a wide menu of food and drinks plus box office facilities. This is definitely worth a visit even if you're not attending a show.


This year's pantomime is Robin Hood, running from 17th December till 8th January. Tickets are priced at £9 per child and £12 per adult (concession price £11) and they run shows at 2pm and 6pm. 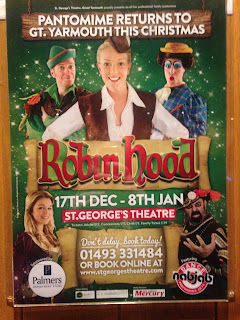 We arrived at the theatre at 5.45pm, I had arranged to collect tickets upon arrival and we were quickly served and directed to our seats. Once we had sorted out, we headed to the small bar area for drinks and refreshments, these were reasonably priced, three drinks and 3 bags of sweets came to £13.50. 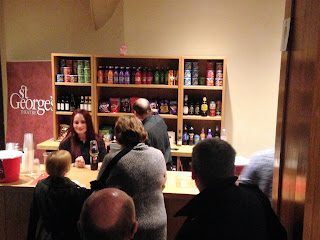 Adjacent to this is a stall selling popcorn at £1.50 per bag, programmes, light up sticks and such like. They also have a raffle at each panto performance with tickets costing £1 per strip, I always get the girls a strip each.
We also made sure that the girls had used the toilets before the show started. Then went back to our seats. 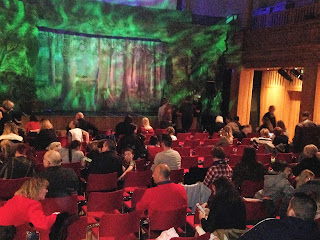 This year we were third row back and in the centre so we had a great view of the stage. The theatre auditorium isn't overly big and the back rows are tiered which makes sure that the entire audience has a good view. 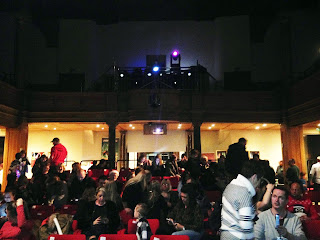 A few minutes before the performance was due to start a character dressed as a minstrel came out and took a seat at the side of the stage, pretending to play along to the music. He then opens the show and introduces everyone to their evening of fun and laughter.

The panto was a fast moving show, packed with jokes and slapstick comedy. Plenty to keep the entire audience entertained and included a couple of parts where they got some unsuspecting member of the audience up on stage!

The show followed a storyline based on Robin Hood but full of songs and dance and plenty of innuendos to keep the adults amused.
The girls favourite characters were Will and Robin Hood's mum, The Panto Dame.
They had the audience in stitches of laughter. 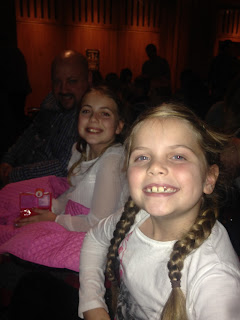 We had a great time watching the Panto at St Georges Theatre, you still have time to book as they run until Sunday 8th January. Make sure you give them a call today or book online.

Not only does St Georges offer a wide range of shows all year round, they also run theatre groups and is available for hire for events including weddings! What a beautiful building to get married in, imagine making your vows in this listed building.

Panto at the Pavillion - Oh no it isn't!

Last week the girls and I got a chance to enjoy the pantomime at The Pavilion Theatre, Gorleston and what a lovely way it was to kick off our seasonal celebrations!

The Pavilion Theatre is over all year round and is situated right next to Gorleston's stunning beach and stands out with its Edwardian red brick, topped with green copper cupolas. The theatre seats 300 and was built in 1901, today the original building still stands in its entirety having avoided damaged during the wars.
The theatre overlooks the gardens on the lower prom in which the Gorleston Bandstand takes centre stage.

As you enter the building you find the Box Office immediately ahead, the walls are full of memorabilia of bygone days. This theatre has a rich history and they proudly display this for visitors.

Instead of rows of seating, the Auditorium is set out with tables and chairs making it comfortable for those with drinks and snacks. Inside it is beautifully adorned with carved wood, heavy red curtains and gold trim, giving the theatre an opulent feeling.

Each year The Pavilion hosts a popular Pantomime, starring radio and television presenter Helen McDermott, this year's panto is Aladdin.

The panto is a fast moving, lively and fun-packed show, packed with slapstick comedy for the whole family and innuendos to give the adults a chuckle!
The characters are brightly adorned with the usual mix up of genders playing parts.
Helen McDermott opens the show as a stagehand who finds herself suddenly standing in as The Slave of the Ring, as she rushes off stage to get ready the curtains open to reveal Abanazar, cue boos and jeers from the audience.

Next we meet Wishee Washee, Aladdin's older brother. He adds a fun element who the children warm to. He also introduces the audience to the vibrant, larger-than-life Widow Twankee!
Onto the stage bursts Widow Twankee is full Panto Dame regalia!
From here-on the laughs come thick and fast.

Shortly Aladdin makes his first appearance, running from the police and uses his mother "ample" figure to hide behind.

Soon he is telling the audience that he has fallen in love, with the Princess!

The show goes on, full of laughs, dancing and songs.

As the story unfolds we find out that the Princess herself has seen Aladdin and fallen in love with him. However, her parents insist that a Princess can only marry a man of money and title.

Meanwhile, Abanazar has discovered he must find the magic lantern from a cave, he needs to find a young man to help him and happens upon Widow Twankee, she uses her womanly virtues to try and seduce him but he sees this as a means to get her young son, Aladdin to retrieve the lantern.

Once Aladdin is in the cave he is able to gather jewels and gold, hoping that he can win the Kings approval to marry Jasmine, deciding not to give Abanazar the lantern, he finds himself locked into the cave.
Disaster!

But with the help of the audience he decides to rub the lantern and with a puff of smoke, the Genie appears.
He is able to grant Aladdin's every desire, firstly being freed from the cave.
Now he has riches and the Genie grants him a title, now he is able to marry the Princess.

But Abanazar isn't about to give up, he tricks Jasmine into giving him the lantern and takes it and her to Eygpt.

Hotfooted by Aladdin, his plan is foiled and the pair reunited.

By the end of the Panto we have laughed so much that my tummy hurts and we leave with songs stuck in our heads and ready for the Christmas Season.

The Panto runs now until the 31st December so make sure you book soon. Full details can be found here.

The Pavilion Theatre also offers a Panto just for adults!
Jack and his Big Stalk!
I've not been to one of these but have heard great reviews.
Unfortunately for us this has already sold out this year but be sure to look early next year so you don't miss out.

We have another Panto booked, our now Christmas Eve tradition, which we are very much looking forward to. 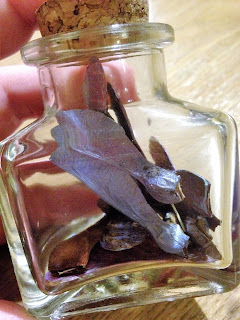 We had previously collected Sycamore samaras, the winged seeds which are commonly known as "helicopters" due to the way they flutter to the ground.
The girls spent a happy hour walking in the Autumn sunshine gathering helicopters and carefully carrying them until we were home. 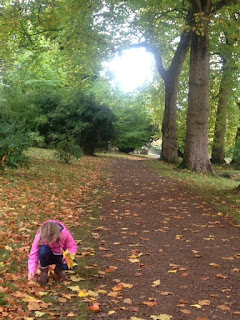 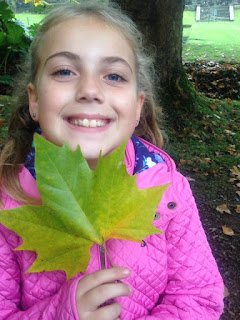 We then laid them out to dry overnight and then picked through, selecting the nicest ones and the ones which were a bit unique - double ones, skeleton helicopters etc. 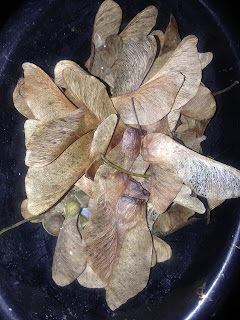 Then it was time to start painting! Being Fairy wings it was important that they were shimmery, I mean, what Fairy wouldn't have glimmer wings!

I picked up these paints in Poundland, they had various colours and the girls choose pink, green, blue and purple. 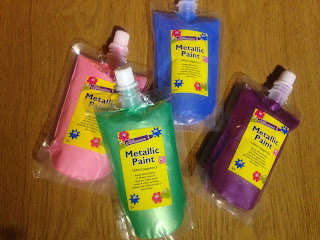 Mollie squeezed a small blob of each colour onto a plastic dish and we found that the paints went along way, we barely used any!

I also picked up a packet of paintbrushes in Poundland at the same time, a pack of 5. I picked ones with small brush heads so that they would be gentle to the delicate helicopters. 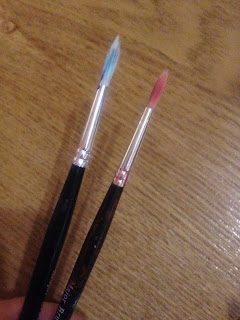 The girls paint carefully, using a variety of colours and adding some spots or mixing a few of the colours to experiment. They worked away at this for almost an hour!

These were then left to dry.

When we had been to buy the paints, we had also popped into The Works and found these cute little glass jars. The triangular ones were £1 each and the small phials were 6 for £1. We also picked up a small glass jar of fine glitter, again for just £1. 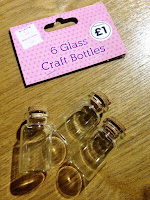 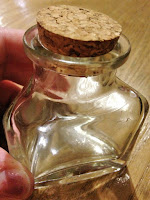 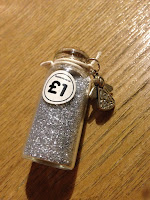 Once the wings were dry, the girls carefully placed them into the jars, several mixed ones in the larger jars but they kept the special double ones, the prettiest ones and put these in pairs in the smaller jars, with an added sprinkle of glitter fairy dust.

They then gave these out at school to friends and teachers. 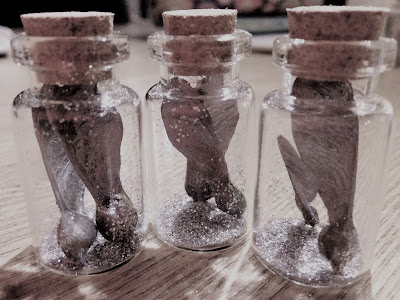 I think they look really cute!

They have already looked for their next project using Sycamore helicopters....

....I think these may prove a little trickier!

Earlier this Autumn Emily's friend told her about a club that she attends, Back to Basics Bushcraft. Being a child who is in her element when getting hands on with nature this sounded like the ideal club for Em's and we made enquiries into signing her up.


Later that week Emily went along for her first session and LOVED it! 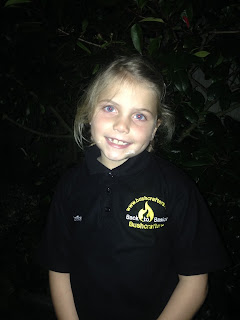 The session runs for an hour each week during term time and costs just £3. In addition to this, they have had camp nights during the Summer holiday which was Emily's first sleep out in a tent and she just wished it had been for longer. Bushcraft is a children's survival skills and Bushcraft club which offers the children fun, safe and educational activities. 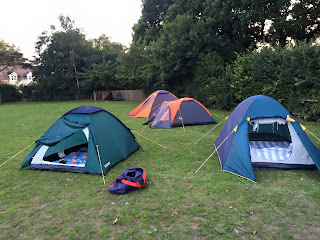 The club is run by Jonathan and his crew of helpers, plenty of adults about to ensure the children are safe and engaged.
They offer activities such as den building, natural object crafts, First Aid, outdoor cooking, fire lighting, archery, wildlife activities and so much more, as well as fun games. All of this also goes to building the children's confidence and social skills.


The school grounds where Emily attends boasts a secure and equipped purpose Bushcraft area, With log seating, plenty of sticks and branches for den making, equipment hut, pit fire area and vegetable patches. Along with natural habitats to encourage wildlife. 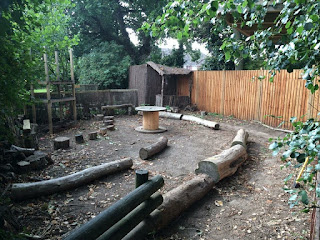 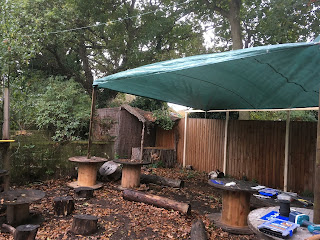 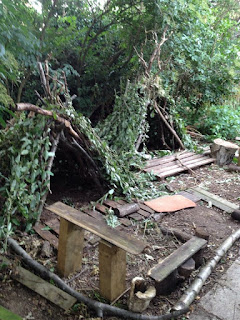 They also have access to the school hall so whatever the weather they can enjoy their various activities, especially the lastest Emily has been learning, Whittling.
For this they need the light so they can use the knives safely, and the large hall accommodates this, allowing each child to work in their own space. 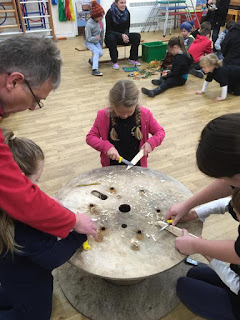 One of the things Emily most anticipates when going is cooking outside, be it the bacon rolls after a camp night or S'mores over the campfire, she loves it! 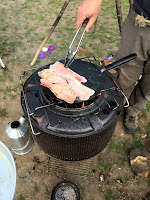 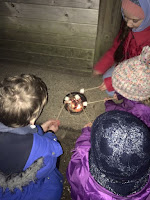 Bushcraft also offer party packages (this is on Emily's party plans for next year!) 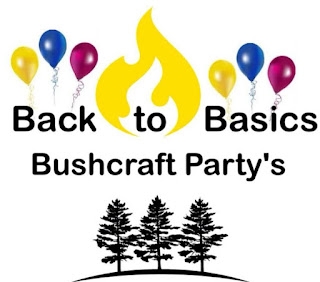 prices start from just £6.99 per child for 1.5 hours of great fun! Party packages offer a variety of activities to choose from so you can customise the party to your child's likes.

Emily is thoroughly enjoying her fun at Bushcraft and eagerly awaits for in each week. To find out more then visit their webpage or check them out on Facebook.