A quick shopping trip in Norwich last Sunday after swimming found us needing a stop for lunch. We fancied something a bit more than the usual fast food place and Mollie requested Ed's Diner (open daily from 9am-8pm and 10am-6pm Sundays) in INTU Chapelfield. 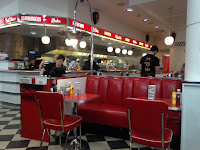 We had eaten here previously and all enjoyed it so we headed that way. It was also in a handy location for our next stop - Build a Bear Workshop for Emily to spend her gift card.

The restaurant has a 1950's American Diner theme (lots of red and chrome) and we were pleased to see a short queue. The server greeted us and told us it would be 10-15 minutes until we could be seated, it turned out to be much less.

We were taken over to a booth style table which over looked the lower level shopping area.
At the end of the table was a small table mounted jukebox with songs from the era; lots of Elvis, Johnny Cash, Everly Brothers, Patsy Cline etc. At just 20p for a song selection the girls enjoyed browsing and choosing a few hits - Elvis Presley "Blue Suede Shoes" being their favourite! The girls were given Ed's Junior Chef hats and a plastic cup of crayons to doodle on their menus and complete the puzzles on the reverse. 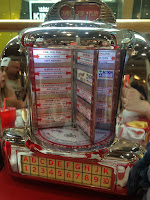 Our order was taken fairly quickly as we were ready, the girls both opted for kids milk shakes (£2.15)
Chris ordered a Peanut Butter Thick Shake (£3.95) However they gave him the Peanut Butter and Brownie Shake by mistake but he didn't mind so he kept it.
with added Malt and I went for a refill Sprite (£2.75)

We also ordered our food, they had run out of Chicken Tenders and apart from these the kids menu only offered Burger or Hotdog, neither of which fusspot Emily would eat.
The server said she could have a crispy chicken fillet cut up instead but by this time Emily had already got her heart set on the American pancakes with Maple flavoured syrup from the Dessert menu so she stuck with that! It also came with a scoop of vanilla ice cream (£4.95) 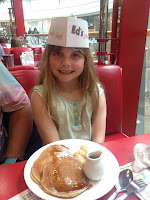 Chris went from burger and fries, accompanied with onion rings and colslaw. It made a nice big plateful too! (£10.20) 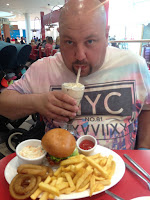 Mollie chose a Hotdog with fries from the kids menu and certainly seemed to enjoy it (£4.65) 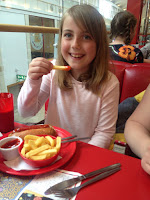 Lastly, I quite fancied something light (been out the night before, feeling delicate! Also we had popped out for a breakfast before swimming so I still felt full!) I went for the Chicken Caesar Salad. It was lovely and fresh, plenty of diced chicken and croutons. Not too much parmesan shavings or dressing (£7.95) 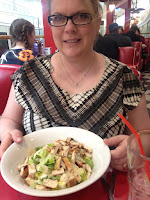 Overall an enjoyable meal, nice atmosphere and in a very handy location. We'd definitely go again, it makes a shopping trip to Norwich a more pleasant affair. Whilst there we were given a rating card to complete which also signs you up to "Ed's Club" which sends out special offers via email. These include free burgers/hotdog with the purchase of a drink plus more.

So if you're heading that way make sure you stop in and enjoy a meal.

Jaimexx
Posted by Chris Speed at 19:35