The Storyteller - Do You Have a Story to Tell?

Have you ever listened to story?
A story that totally enraptures you?
One where you daren't even breathe in case you miss something?

If you've ever heard The Storyteller Chris Bostock then you can answer yes to all these questions. We had the privilege to go and watch him this week at The Mezzanine, Northern Stage, Newcastle. Tickets cost £4 per person and he can be found performing there each month. 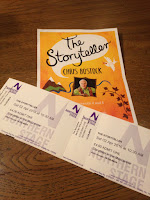 When we arrived at The Mezzanine, The Storyteller was there to greet the children in, making himself familiar and encouraging the children to head for the toilet before going through to the performance room. The room itself was set out simply, a few rows of comfortable chairs for the adults and the children invited to take a seat on the glittery carpet at the front. Chris sat himself at the front and it made for a cosy story time. The children aged between 3-10 years old. 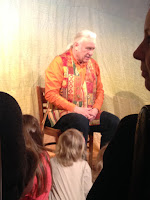 The session ran for approximately an hour, with Chris telling three different stories each taken from traditional tales. He didn't need to rely on a book or a variety of props, he simply used his linguistic skills to entice the listeners.
Before he started he drew the children's attention by using two small bells to see if they were listening, those who were would be able to hear the bells jingle, those who weren't would hear silence. Fortunately for us we could all hear the jingles so it was time to start.

Chris Bostock has a pure gift of Storytelling, he entertains and excites the senses whilst encouraging the listeners to enjoy the stories in their purest of forms, the imagination.
He had a beautiful use of expression and facial gestures so the children knew which character he was being.

Between the first and second stories he had the children search the room for photos of houses; bug homes, rabbit warrens, wooden huts, town houses and many more right up to a palace! The children sorted these into small and large houses and then took their seats.
This helped to settle the children again for the next story and get rid of the wriggles.

Chris has a good understanding of the curriculum and encouraged the children in different ways to enhance the session, he had them closing their eyes, imagining, joining in and predicting, all valued skills for children to learn, which I guess is why so many schools have him visit.

Before the final story Chris ensured that the children were still listening by introducing an unusual mouth instrument, I couldn't tell you what it was as I never seen one before but it made a light vibrating twang.
Lastly was a traditional tale from Africa which had a beautifully simple bird song which the children were encouraged to join in with whilst making gentle,swooping birds with their hands. The children were happy to join in and enjoyed singing the bird's song.

And they lived happily ever after... 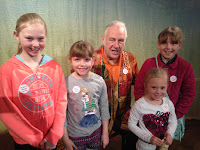 The children weren't rushed out after the session and Chris was happy to have photo's taken, ensuring one little girl and her school bear had their chance. He also gave out stickers saying "I Have a Story to Tell" to encourage the children to go away and share the stories with friends.

If you get a chance to see The Storyteller then make sure you go, a truly talented narrator who brings stories to life for audiences young and old.
More information on Chris Bostock can be found by visiting his website (coincidently he has previous fame as part of Joboxers and had a hit with Boxerbeat!)
I know I will be contacting him to try and book him for my school, I just hope that he will travel this far!

Jaimexx
Posted by Chris Speed at 07:30