Fancy something different for your child's birthday party?

Our girls have both enjoyed pool parties in the past and were recently invited to one for their friend.
The party was held at the Phoenix Pool in Bradwell. The pool has been there since the 1970's but in September 2016 it reopened after a £1.9m makeover.

The Phoenix has its own free car park with ample space for visitors.
It is open daily but swim times and party booking availability varies, so check out their website to find out full information.

Upon arrival to the party, the children gathered in the foyer before a member of staff then directed them to the changing rooms, these are family changing facilities, with lockable changing units and two large changing areas which are generally used for groups. There are plenty of lockers and clean shower facilities.

Once everyone was changed we were taken through to poolside, the pool party bookings give you exclusive use of the pool for 1 hour, plus an hour in one of the function rooms for food and cake (these are not included in booking.) 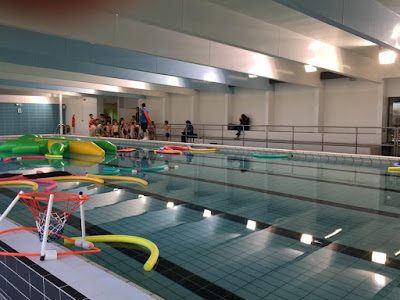 The pool was set up with a large inflatable crocodile for the guests to climb on and slide off, there were also balls and floats of various types - some big enough to sit on.

The party mum took some extra inflatable balls and foam water squirters too.

The pool looked lovely and tranquil - just right for 30 children and adults to jump in! 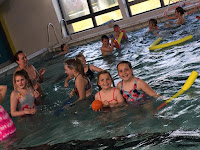 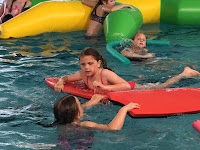 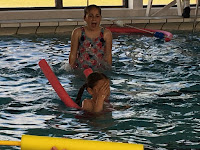 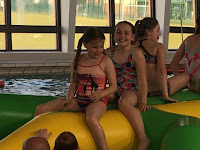 Whilst the party was running there was pop music played and the lifeguards interacted with the kids, splashing water over them and trying to wobble the inflatable to make them slip from the top.

There were 3 lifeguards who stayed poolside throughout, plus another one who came in intermittently, I must say it did feel nice and safe. 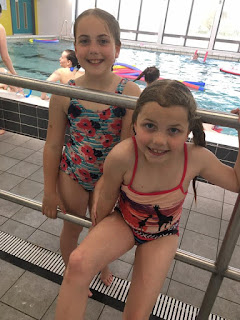 After the party, everyone changed and we were taken upstairs to a function room, this is obviously used for a fitness class at times too as the equipment was stored around the edges. The room was very large though and the children had plenty of space to run about, sit and have their party food and drink.

It was a fun party and nice to do something a little different, especially as the girls are getting a bit older.
For more information visit the Phoenix Pool website or find them on Facebook. 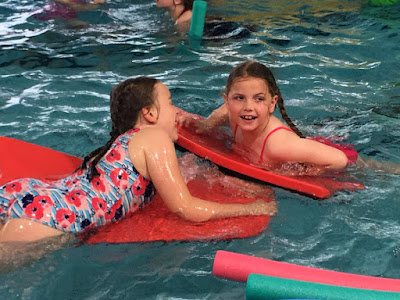