Did you know that every year farms across the country open their gates up to the general public, they put on exhibits and hands on learning for all, they give away free samples of their fresh produce?

Neither did we until last year after I had a visit from a local farmer at my workplace. Richard Hirst from Hirst'y Family Fun Park came to spend the day in my class and whilst there he told me all about Open Farm Sunday. 2016 saw the event reach it's 11th year.

"Open Farm Sunday, managed by LEAF (Linking Environment And Farming), is one of the farming industry’s biggest success stories. Since the first Open Farm Sunday in 2006, over 1000 farmers across the UK have opened their gates and welcomed people onto their farm for one Sunday each year. It is a fantastic opportunity for everyone, young and old, to discover at first hand what it means to be a farmer and the fabulous work they do producing our food and managing the countryside."

Every farm is unique in what it offers and exhibits you can see. We have visited Clarkes farm, Martham for the past 2 years and have been fortunate in the weather each time.
Gates opened at 11am and we arrived shortly after this. Learning from our mistake last year we decided to head straight to the tractor ride which takes you out to the farm fields to see their crops and processing areas. Each tractor takes approximately 30 passengers in it's trailer. Then on from this over to the sheep shearing area.  On board the farmer accompanying the ride told us about the various crops and what they go through. We got to see the machinery which particularly interested the younger children on board.
Also on board we were given quizzes to complete during the day, with answers being found in different parts of the farm. We were also given bags of fresh lettuce leaves, greens and spinach (we ended up with five bags so Grandma and Grandad had a couple that evening.) 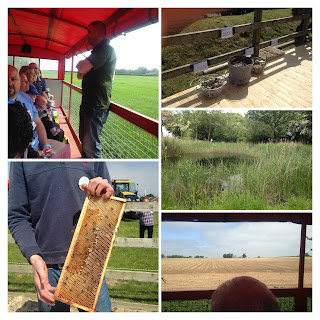 We disembarked here and the first activity we came to was Pond Dipping. The girls were eager to try this (especially as they are working towards their Wildlife Explorers badge at Brownies.)
The lady running this activity was very knowledgeable about the pond life and she allowed the children to work independently and answered their many questions thoroughly. She was completely on their level and got herself up to her elbows in pond sludge without any qualms! 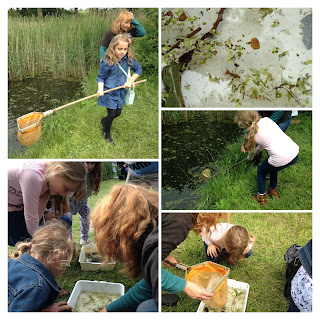 Moving on from this we found the Norfolk Wildlife Trust exhibit. This was a wonderful area where the ladies (so funny) told the children all about wildlife we find in Britain. They had bones, wings (sadly from road kill) nests, pond weed, snake skin which had been shed and so much more. We spent quite a while here as it was so interesting, they even had POO! Animal faeces (not to be touched!) where the children could see particles in the poo of what they animal had eaten. 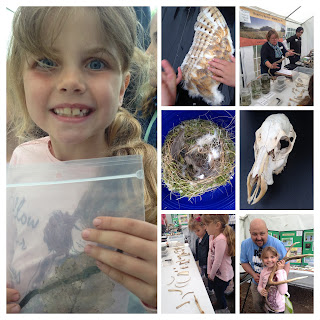 Plenty of hand gel provided at the end of this, as there was after the pond dipping.
Then we were on to the sheep shearing. The farmers demonstrating this were fun and very fast! The girls were amazed at how fast they could round up and shear the sheep, then spread and roll the fleece ready for packing. The bearded farmer in the photo did the main talk about the process and told the children that wool is just a by product of sheep rearing as they are primarily reared for meat and that the wool sells for just 20p per ton! Also that the sheep are sheared just once a year. 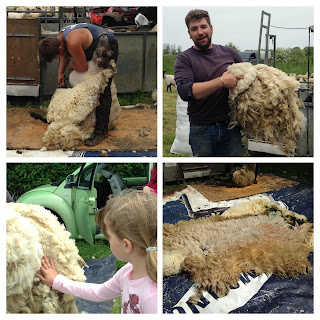 Time to head back to the main farm area. It was just a short wait for the tractor to return (last year we had left the tractor ride till mid afternoon and by then the queue was 2 hours long so we had to miss out! Getting there first thing this year was definitely a good idea)
We arrived back and by now we were feeling hungry and the smell of the BBQ tempted us into the Farmhouse gardens. These were large with plenty of seating available but also wide open spaces for picnics.
The BBQ was simple but very tasty, there was a rather long queue but it was worth the wait. Burgers and hot dogs were reasonably priced at around £2. They also sold cans of pop.
Over the garden was another food area selling hot drinks and homemade cakes, these ranged from 30p-£1 and we ended up having second helpings as they were so delicious! Proceeds from these and the BBQ went to charity.
Then there was an ice cream stall with cones at £1.50. 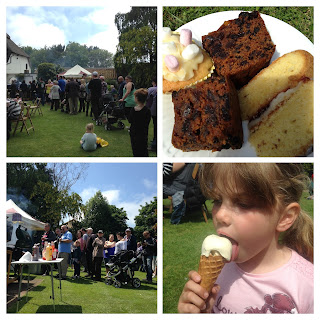 Once we had filled our tummies we ventured into the farmyard to stroll around the machinery and exhibits there. From locally made honey to Kettle crisps (which he farmer provided potatoes for) birds of prey to British Sugar and local ales! I think some of the stalls missed a trick here and could of sold their produce as we would have certainly purchased some of the honey and crisps. The girls and their friends enjoyed climbing on the large machinery, ever a photo opportunity for Emily! 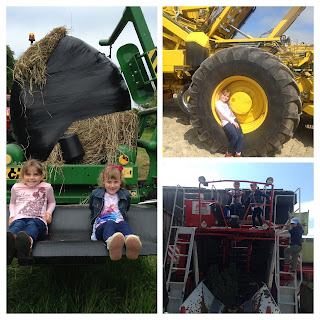 Lastly we went into the stable area where we spent quite awhile walking along the stalls and stroking the horses. I think this was probably my favourite part! It was hard to get the girls to come out. They were rather beautiful. 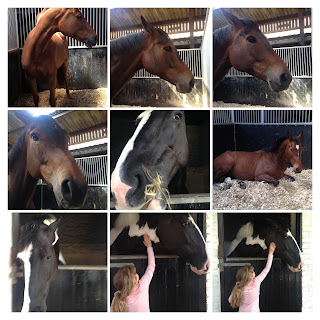 By 3.45pm we were done. It had been a great time and lovely to be out on the fresh air and learning something new. The girls got a bit of a taste for pond dipping and got permission from their Principle to have a go in the school pond that week.
We were hopping to stop off on the way home for strawberry picking but unfortunately they weren't ready yet. That will be a trip for another weekend!

So get the date marked in your diary now!

We absolutely loved it and were pleased to introduce our friends to the event too.